Standing in the chapel again last month, walls of delicate glass rose up around me—more than a thousand panels of shimmering red and blue in lancet windows fifty feet tall. Some two-thirds of the glass is original, most from the 13th Century.

The haunted expressions of its figures—frozen in glass for eight hundred years—speak of a world both violent and transcendent; of a mindset almost impossible for us to understand.

Located on the Île de la Cité in the heart of medieval Paris, Sainte Chapelle was dedicated in the year 1248. It was built in the shape of a reliquary, a jewel box of light to hold the most precious relics of Christendom—what were believed at the time to be the crown of thorns and a piece of the “true cross.” 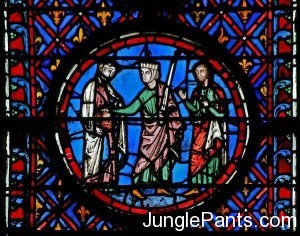 The window program—one of the masterpieces of gothic art—ends with the story of Louis IX (later Saint Louis) bringing the relics of the crucifixion back to Paris, to his jewel-box chapel.

The western rose window, from the 15th Century, depicts scenes from the Apocalypse.

The chapel, damaged by fire, flood and revolution—most of its relics scattered, lost or stolen—was restored in the 19th Century, and is a museum now, one of the loveliest in Paris.

But seeing the chapel is just the beginning of the Sainte Chapelle experience. Visit the chapel in the daytime, but be sure to budget time to return for one of the evening Baroque concerts that are held several times each week from March through December. Chamber ensembles bring the chapel to life with Bach, Mozart, Vivaldi, Telemann or Corelli.

On the September evening when I attended with two friends, the chamber orchestra Les Solistes Français—under the fiery direction of Paul Rouger—transfixed the audience with Bach and Mozart. Their violins soared through two concertos as the setting sun shone through the chapel’s wall of magnificent stained glass. It’s as close as I’ve come to living history, one of those luminous travel moments that transports us back in time, and deep into ourselves.

For a daytime visit:

For an evening concert: